Well, the new building is up and we decided to break some rules and check things out! Beautiful addition and looking forward to meeting are new neighbors.

Later that evening we had a full house for “De Capo”, a Sax Quartet who joined us for an evening of music. Great way to start the Holiday Season. 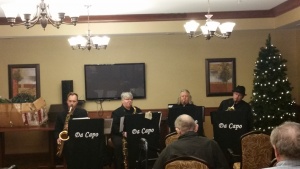 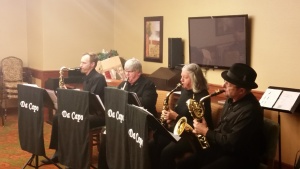 Leo assisting Jill putting up decorations on the tree. Precious!! 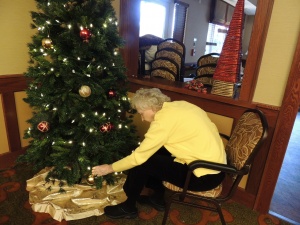 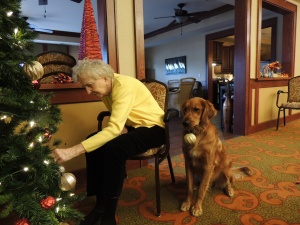 We would like to give a warm thanks to the family, friends, colleagues and residents who made this year and every year a successful and joyous occasion. Happy Thanksgiving! 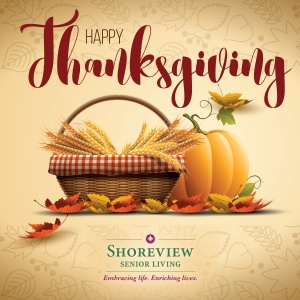 Well last Saturday may have been cold, but residents stayed busy checking out “Taylor Marie” Clothing store right in the comforts of our building. It was fun to see the residents shopping and buying a little something for themselves. Even Rita recieved a new vest from her good friend Laurie.
Later that evening “Metro Dance” Studio joined us for a recital. The kids were so cute, and residents were remembering when their kids were little. Some even danced themselves when they were young. Wonderful way to end the evening.
Read More

Trudy and her grandson joined us for another great monthly sing-a-long about Thanksgiving. Got a little messy with the leaves but residents loved it. Lexi trotted along with her horse as we went “Over the Hills to Grandma’s House”. Trudy does such a superb job each time she comes in! So blessed to have her join our family here at Shoreview Senior Living. She is truly Loved by all.

Games, Painting the Northern Lights, and Leo the dog visits! Lots of exciting activities are happening at Shoreview.

“A Soldiers Deck of Cards”

A young soldier was in his bunkhouse all alone one Sunday morning. It was quiet that day, the guns and the mortars, and land mines for some reason hadn’t made a noise.

The young soldier knew it was Sunday, the holiest day of the week. As he was sitting there, he got out an old deck of cards and laid them out across his bunk.

Just then an Army Sergeant came in and asked, “Why aren’t you with the rest of the platoon?”

The soldier replied, “I thought I would stay behind and spend some time with the Lord.”

The sergeant said, “Looks like you’re going to play cards.”

The soldier said, “No sir, you see, since we are not allowed to have Bibles or other spiritual books in this country, I’ve decided to talk to the Lord by studying this deck of cards.”

The sergeant asked in disbelief, “How will you do that?”

“You see the Ace, Sergeant, it reminds that there is only one God.

The Two represents the two parts of the Bible, Old and New Testaments.

The Three represents the Father, the Son, and the Holy Ghost.

The Four stands for the Four Apostles: Matthew, Mark, Luke and John.

The Five is for the five virgins, there were ten, but only five of them were glorified.

The Six is for the six days it took God to create the Heavens and Earth.

The Seven is for the day God rested after working the six days.

The Eight is for the family of Noah and his wife, their three sons and their wives, in which God saved the eight people from the flood that destroyed the earth for the first time.

The Nine is for the lepers that Jesus cleansed of leprosy. He cleansed ten but nine never thanked Him.

The Ten represents the Ten Commandments that God handed down to Moses on tablets made of stone.

The Jack is a reminder of Satan. One of God’s first angels, but he got kicked out of heaven for his sly and wicked ways and is now the Joker of eternal hell.

The Queen stands for the Virgin Mary.

The King stands for Jesus, for he is the King of all kings.

When I count the dots on all the cards, I come up with 365 total, one for every day of the year.

Each suit has thirteen cards, there are exactly thirteen weeks in a quarter.

So when I want to talk to God and thank Him, I just pull out this old deck of cards and they remind me of all that I have to be thankful for.”

The sergeant just stood there and after a minute, with tears in his eyes and pain in his heart, he said, “Soldier, can I borrow that deck of cards?”
Please let this be a reminder and take time to pray for all of our soldiers who are being sent away, putting their lives on the line fighting for us.

Craft time!! Some painted pumpkins, while others put together a beautiful wooded cross made from a variety of wood….thanks to Home Depot!!

We had a terrific turnout for the “Metro Men” Barbershop performance. They were wonderful. Residents sang along to all the songs they grew up with. They even ended the show with a lil’ holiday cheer to kick off the holiday season.

Started off the morning with Kindercare coming over to decorate Trick-or-Treat bags, perform a skit for us, have story time with Mauree, a little extra fun with the parachute and of course, a snack. It was a Spook-tacular time! Kids left with bags full of some special treats given out by residents.
Throughout the day, residents Tim aka, “Mr Whipple”, who was so cute that residents wanted to squeeze him as he did his daily maintenance, Jeannie A “Snow White beauty” and a Gail a “lil devil” cleaning rooms, Kinsey our nurse who was a raccoon for the afternoon, Kristy as Strawberry Shortcake who spread a little sweetness all day and of course referee Luke who kept things under control all day wheeling around on his roller blades!!! During lunch residents were unsure of the chef as he served up some “Vampire Soup”.

Later residents Celebrated adult style. We played Halloween Bingo, Heads and Tails , heard some jokes and found out the winners of all the Halloween contests. So fun to see so many residents participate in this event and use their creativity. Dennis and Donnie won the awards for the top 2 pumpkin decorators, Rachael won the prize for the candy corn count. The Masquerade Couple won the “Best Costume”, Ms. Voodoo won the “Scariest”, The Smurfs and Gargamel won the “Most Creative”. It was perfect a fun afternoon with so much hauntingly good fun!!

Thank you to the many family members, staff and volunteers who helped with this event. Could not have done it with out you!

Great afternoon at Hinckley Casino. Played some Bingo on the bus ride and caught up on conversations. Had a 3 cent winner all the way to a $300 winner.  Some dined at the grill while others just had a quick bite in the café.

With honor, respect and gratitude, thank you, veterans.
Happy Veterans Day from your friends at Shoreview! 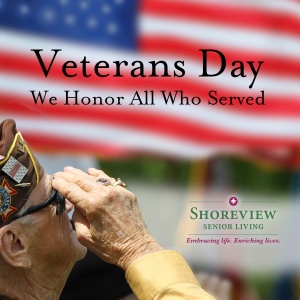 With RSS feeds, you don't have to visit our site everyday to keep up to date. Simply subscribe to our blog via RSS or Email and our posts will come to you!